I want to share some of my learnings on Clean Architecture, Presenters, and some design decisions.

During this time I have been busy studying the book “Clean Architecture” by Robert C. Martin. Together with Matteo Pierro and Piero Di Bello we started an online book club (it’s in Italian) by discussing each chapter of the book, followed by hands-on sessions to apply our learnings on an example project.

The argument that I have found more difficult to understand is the one related to the separation between the domain logic and its presentation. In Clean Architecture, this separation is achieved through Presenter, ViewModel, and View (read chapter 23 on “Presenters and Humble Objects”).

What puzzled me the most, and we will see later where this source of confusion originated, and what are the teachings I have drawn, is the fact that in the book there is no trace of code where you can look at to understand how this separation can be practically translated into code.

If that wasn’t enough, the book offers a few design diagrams to show how Presenters, ViewModel, and View can be organized. We will discover that different design choices have pros and cons and that a clean architecture is more tied to a principle, rather than a rigid framework to adhere with.

The Presenter, ViewModel, and View dilemma

For our hands-on session, we decided to build a to-do list application. An application that can be used to manage a to-do list, and we started from the use case for creating new to-dos: The AddTodoUseCase.

While we were thinking and working on the UseCase, we decided to follow the design proposed in chapter 22 on “The Clean Architecture” of the book: 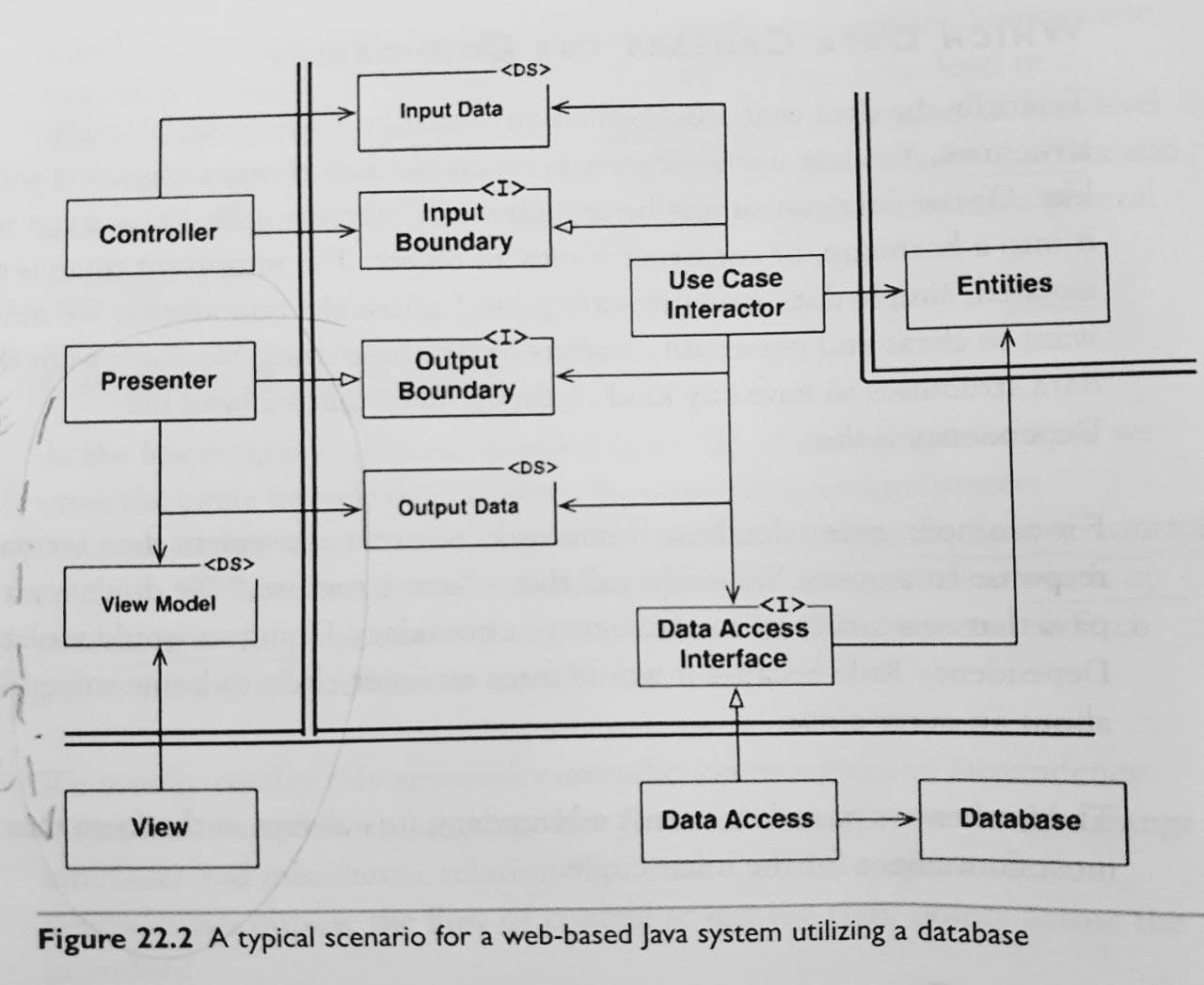 We evaluated different options for the Presenter, ViewModel, and View flow.

At first, and I would say naively looking at this diagram, it comes quite naturally to use the Observer pattern where the View is the Observer and the ViewModel the Observable.

Implementing an observer mechanism was not straightforward and the resulting code was more complex than expected, and to confess I had hard times figuring out the flow of execution.

Opting for an observer isn’t great because we don’t want the ViewModel to attract more than one reason to change:

The synchronization mechanism has to happen somewhere else, and to make things more interesting we need to remember that the code responsible for synchronizing the View with the ViewModel shouldn’t know anything about the View. Thus because of the Dependency Rule 1:

Source code dependencies must point only inward, toward higher-level policies.

It was possible to satisfy this constraint by introducing an intermediary collaborator between the Presenter and the View, which we named ViewModelPublisher.

In such a way that the ViewModelPublisher acted as an Observable, the View as an Observer, and the Presenter was responsible for creating the ViewModel and then notifying the view of its changes.

Here you can see part of the implementation of the Presenter:

And what next is the “wiring” between the ViewModelPublisher, the View, and the Presenter in the main application code:

Some criticisms I feel like giving to this design choice are:

Option 2: Getting rid of the Observer

During a second iteration, we decided to rework the entire part related to Presenter, ViewModel, and View flow trying to eliminate the implementation of the Observer pattern.

Thankfully to Matteo, he had this great intuition to let the Presenter directly publish the ViewModel changes on its View, without the need of an intermediate collaborator, but at the same time satisfying the Dependency Rule.

Looking at the diagram above we made a few changes: 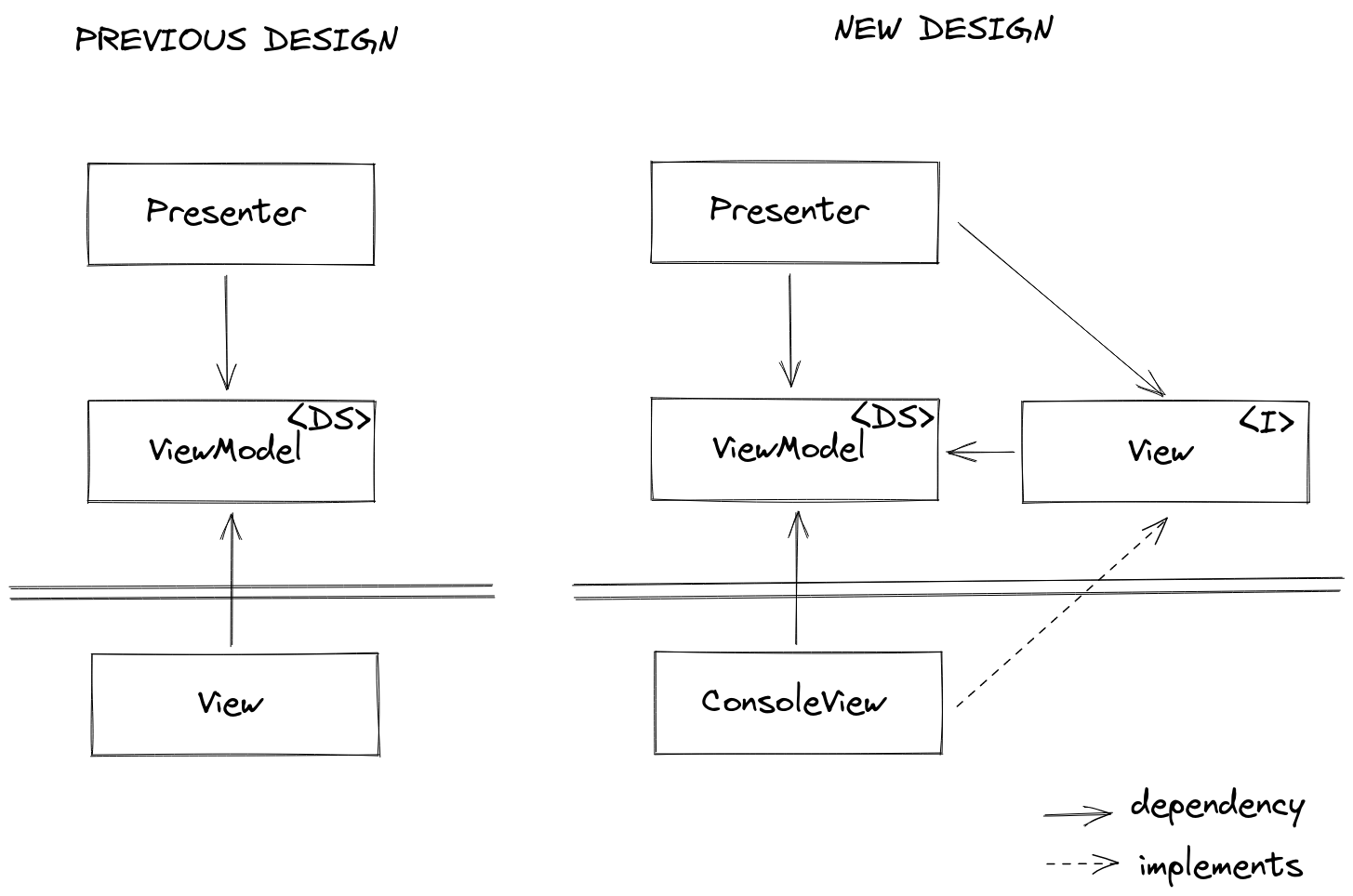 The Dependency Rule is still in place since the code dependency ConsoleView is pointing inward, and we managed to promote the View as a “higher-level” policy.

While the resulting code of Present might look quite similar to the previous implementation, an important detail now is that the Presenter renders changes directly to the View.

A bigger improvement is instead achieved on the main application code, responsible of the “wiring” between Presenter and View:

We are no longer tightly coupled with a concrete implementation!

The part I liked the most here is this clearer separation between the Presenter, its View, and the different implementation of it. In the above example, we want to render our changes using a ConsoleView.

Compared to the Observer option, I value this solution more because:

I think the biggest learning from this experience is that what matters most when working towards a Clean Architecture is to always keep the Dependency Rule in mind and at the same time decide on the simplest possible design that sticks to that principle.

Comment on Twitter
Read more on #programming
« Learning with Tests: Part II Use Cases: The purpose of your code »